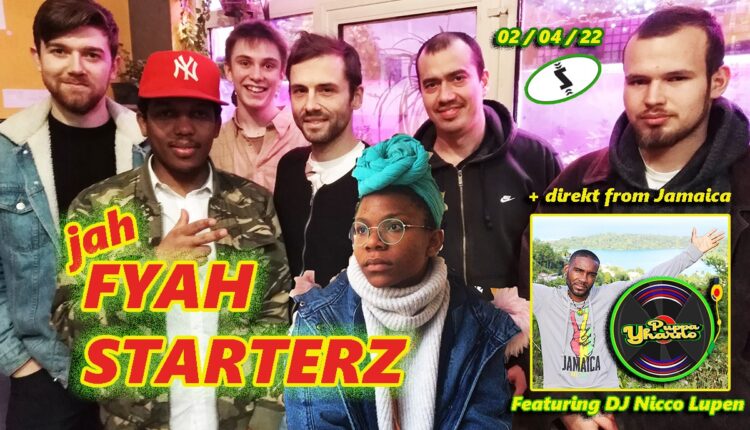 Raggamuffin ‚n‘ Reggae Respect A+ New allstar band ‚ Jah Fyah Straterz.
Featuring
Fyah Son Bantu – MC
Emil Novotný – Guitar
Lukáš William Mezger – Bass
Jakub Punter – Keys
Carlos Rodríguez – Drums
František Vaníček – Trumpet
&
Alyssa Dillard & Kitsy Kintè – Choir vocalz
–
From all around the round world with the love of music has gathered in Prague for one soundsystem extravaganza.
Roots, Rhymes & vibes coming at you hard & happy.
& it goes a little something like this
Special GIFT for Bless!
https://www.facebook.com/fyahsonbantu
Spotify: https://play.spotify.com/artist/5hWVs9iSZ5hVKWxK7pJ8gs
Puppa Yharno + DJ Nicco Lupen
In 2011 Puppa Yharno signed a recording deal with a UK label,USP Records. His relationship with the label led to the release of his first mix tape “JAYDAY VOL 1” in 2012 and “JAYDAY VOL 2” in 2013, followed by his EP “Hard at Work”.
Also signed to Stand Alone Records in America, in 2014 he teamed up with producers Cocoman / Coco Jammin productions based in Czech, where he had recorded singles such as, “Wine and Dip”, “1975” and “Cannabis” for the Album Compilation Sklizen 2014. The compilation was later nominated for the Andel Award In Czech Republic, Puppa did is first international tour October-November of 2015 for six weeks with 13 shows across 11 cities in Czech Republic in 2015.
In 2021 he released “PUPPA YHARNO LP” and was featured in Czech Republic on “SKLIZEN 2021” with a song called “DIBIDIBI”, Puppa Yharno continues to work hard to further establishing himself on the music scene. As for his goals, he says his main aim is to deliver good music that will uplift the hearts of many with nothing but his voice.
https://www.facebook.com/PuppaYharno
Nicco Lupen – https://open.spotify.com/artist/5EJzfRqsmxGlhKPuoSmDLU…