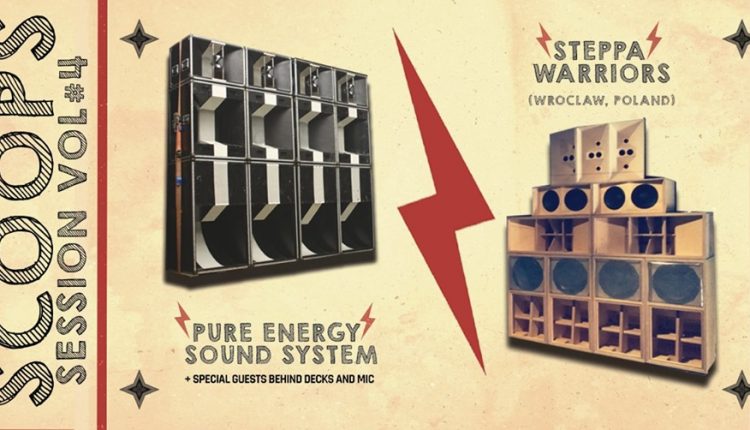 Accept this invitation to the next edition of Scoops Session roots & dub music soundsystem conference. This time Pure Energy Sound System will host heavy weight sound outta Wroclaw, Poland – STEPPA WARRIORS. As usually, we will present two 4-scoop stacks playin in a rotation fashion. Super-deep basslines, conscious lyrics and uplifment positive vibes. We will be serving this until morning a rise.

This will be most probably the last SS in this wonderful Pokojicek venue :(( It is closing in early 2020… So don’t miss this last chance to enjoy a dub dance there with us.

The collective is run by a group of friends. Jarecki – a selecta, co-founder of the www.dubmassive.org portal. Robbie aka Nesta is doing almost everything what is related to music, but in Steppa Warriors he is a micchanter. The quality of our sound system is under control of Kajtek – an educated acoustician and sound engineer, who has worked in musical studios, radio and other companies related with musical production; he’s also the builder of the several cabinets used in Steppa Warriors’ sound system.

Steppa Warriors’ sessions are filled with good vibration and energy; it’s the result of quality selection of records and dubplates, DJing and proper attitude to generate sub frequencies; our activity is driven by a soundsystem culture of “Word, Sound & Power”.

Over the years Steppa Warriors were involved in many events such as Friday Reggae Special or Rootsman Corner. Currently they are focused on their flagship, original cycle of reggae/dub events – Dub Arena and try to play all night sessions in a pure, soundsystem style. From March 2017 they play on a brand new, hand-built, 5-way sound system.

Under the name Pure Energy Sound System we promote and organize events in the legacy of the original foundation of the soundsystem culture in Jamaica. We are using our fully custom 4-way stack of speakers based on legendary scoop subbass bins to present uplifting vibrations of the roots reggae and dub music. We continue to spread the blessed teachings of H.I.M. Selassie I. JAH Rastasfari. We like to cooperate with other soundsystems from Czech republic and other parts of Europe and to join forces in so-called dub conferences, where two or more soundsystems take turns and play in one hall.

+ many guests on decks and MICs